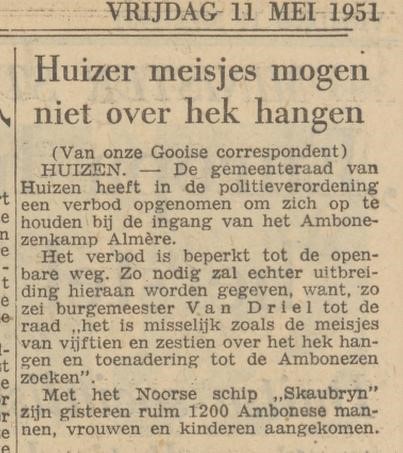 In May 1951, the local council of the town of Huizen in the Netherlands adopted a local police regulation (Algemene Politie Verordening) prohibiting town girls from hanging out at the gates of the camp where recently arrived Moluccan colonial migrants were housed. The newspaper article in Het Parool reporting on this regulation quoted the town mayor saying that he got ‘nauseous’ by the 15 and 16 year old girls, who sought contact to the ‘Ambonese’.

In light of the various events organised this year to commemorate the 70-year presence of Moluccans in the Netherlands, it seems appropriate to go further into the way these colonial subjects were received, especially in relation to the regulation of mixture. As will be demonstrated, the local regulation in Huizen was not exceptional, but part of a pattern of regulation of mixed relationships and marriages between Moluccans and Dutch nationals, that was framed in terms of ‘racial mixture’.

Moluccan migration to the Netherlands

The Moluccan families were housed in camps spread across the Netherlands, often in small towns and rural areas, in old monasteries or former concentration camps where Jews were jailed during the war, separated from the rest of Dutch society.1 Their integration was considered problematic, not merely in terms of economic and social integration but also as an issue of morality.2 One of the issues of concern was intimate relationships with Dutch men and women that developed. Especially those between Dutch women and Moluccan men worried authorities, as the Parool article exemplifies.

Keeping Dutch girls away from the camps

More than just concern, the mayor of Huizen, Van Driel, expressed aversion towards the girls from Huizen who sought contact with the Moluccan boys. Van Driel was a trained legal scholar and former lawyer, politically affiliated with the Anti-Revolutionary Party. His concern with the moral behavior of Dutch minor girls is resonant of the ‘morality movement’ before the Second World War, consisting of social and political elite groups that worried about ‘moral decline’ in Dutch society, especially working-class youth.3 Van Driel aimed to prevent Dutch girls from entering the Moluccan living areas, and he was not alone.

In fact, the need to prohibit Dutch minor girls from entering Moluccan living areas was part of a nationwide policy. It was debated in the Dutch Second Chamber and Senate and the concern was shared by politicians with and without a confessional background.

The debate on Dutch girls and the Moluccan living areas continued for years. The Parool article was from 1951, when the Moluccans had just arrived. Years later, in February 1958, Luijckx-Sleijfer, member of the Senate for the Catholic K.V.P. worried that prohibition for Dutch minor girls to enter the Moluccan living areas did not suffice to make an end to these ‘undesired visits’, as such prohibitions were difficult to enforce even though the police was surveilling the camps on a daily basis. This was also, the Senate member pointed out, because:

They [the minor girls] show in their visits an obstinacy that would fit with a better cause. 4

The Senate Member suggested that criminal prosecution of the girls might help.

The first female Minister in the Netherlands, Marga Klompé (Catholic Party), of Social Affairs, took over this suggestion that she said to encourage.5 A year earlier, in a memo to the council of ministers, she had expressed concern that letting go of the thought that the stay of the Moluccans would be temporary would result in what she called ‘racial mixture’ (rassenvermenging’).6 She also warned that caution remained necessary and that she would do everything possible to prevent undesired circumstances. She pointed out that this was also a task for the parents, the social workers and the camp elders.7 Sometimes the parents of the young women themselves asked the police or Ministry of Justice to keep their daughter from entering the camps.8 Hence, in regulating mixed couples, sometimes the state and the parents worked together to prevent the couple from being together.

Media reports as well as studies based on archival research demonstrate that the concern was not just about ‘indecent’ relationships between minor Dutch white girls and Moluccan boys, but also about mixed marriages. Newspapers reported on such mixed marriages under headings such as ‘painful problem’.9 Social workers intended to warn the girl’s parents so that they could intervene. These marriages were seen as doomed to fail and seen as forced – meaning that the girls got pregnant. A researcher who interviewed thirty inhabitants of the southern town Vught in 1958 found that almost all opposed marriages with Moluccans. The researcher added:

I share the opinion of the mission with its century-long experience, that mixed marriages are undesirable. Not as a form of caste-policy, but out of pity with the descendants of such marriages. There are already large numbers of people on the world categorised as ‘displaced persons’.10

At the moment it is quiet in the camps to a certain extent. In a way, except for the struggle on self-determination, nothing is going on. The number of mixed marriages is still manageable. The white woman is still warmly welcomed in the circle of Ambonese camp inhabitants. But how will this be in the future?11

The problem of contact and marriages between Dutch girls and Moluccan boys was framed in terms of racial mixture, years after the Second World War was supposed to have done away with thinking in such terminology of biological race.12 Also striking is the relevance of gender: only relationships and marriages between Dutch girls and Moluccan boys were considered a problem, not the reverse combination. This is in line with our findings in the Euromix project as well as academic literature: there is an obsession of state authorities with mixture by white women, as women represent the nation, their relationships and behavior are problematised as endangering the nation.13 Finally, the discourses blame the Dutch white girls for their obstinacy, apparently; they are seen as the initiators, seeking out contact with the Moluccan boys, rather than the other way around. We learn nothing about whether the Moluccan boys welcomed this attention or how they responded. This is again in line with what we found elsewhere: that the white woman is to blame for mixed relationships; contrary to the socially ascribed gender roles in the 1950s and 1960s, as well as racialised boundaries, she does not remain passive but is exerting improper behavior by initiating these relationships.

To deal with these issues, the Comissariaat Ambonezenzorg (Commission care for the Ambonese, CAZ) was established, as a national state institution that played an important role in formulating a policy that resulted in government intervention in private relationships, described by historian Charlotte Laarman.14 The Commission was not established especially to deal with mixture, but mixture was seen as an important part of their task. Laarman describes the attitude of the Commission as paternalistic; every Moluccan was supervised by a social worker of the Commission. Hundreds of reports were drafted by social workers on such mixed couples.

Mixed marriages and relationships, especially those of Moluccan men and Dutch women, were a major cause of concern. The CAZ tried to prevent such relationships. Discouraged marriages and couples that married anyway came to be supervised, sometimes for a duration of several years. As a rule, they were seen as problematic cases, even if there were no health issues, criminality or other problems: being mixed was their problem.

It was the Commission’s conviction that mixed families needed guidance. As ‘problem cases’, they were under surveillance with regular visits by social workers. Marriages between Moluccan women and Dutch men were not reported, because they were considered Dutch families and also because they often lived outside the camps. Contrary to families of white women and Moluccan men, the families of Dutch white men and Moluccan women escaped state surveillance.

If the family ‘behaved Dutch’, this was evaluated positively: with racialised notions of being clean, saving money, speaking Dutch.15 Nevertheless, there was always the assumption that problems would arise at any moment, as the husband may no longer accept the Dutch cultural dominance of his wife. If the Dutch woman adapted to Moluccan culture, e.g. by learning the language, cooking Moluccan meals and having contact with Moluccan women, this was considered problematic, put into terms like ‘fanatic’ and ‘creepy’.16

On the other hand, the commission was not concerned about the legal consequences of marriage for the Dutch women, who lost their Dutch citizenship from the moment they married their Moluccan husband.17 When lawyer W. Schols, CAZ-director for the Southern district pointed out this legal consequences, his letter was put aside after commenting: ‘It is not our task to interfere’.18

As demonstrated, the Moluccans were faced with different types of regulation of mixture: they were housed in living areas segregated from the wider Dutch population, and their intimate relationships and marriages were surveilled by police and social workers. Local and national authorities were involved in efforts to prevent ‘racial mixture’. In this respect, they were treated very differently from the other major group of colonial migrants from Indonesia, the Indische Nederlanders, Eurasians of mixed descent, who were the target of assimilation policies.19

As always, in spite of all these state efforts to prevent them, mixed marriages and relationships happened frequently and from an early stage. The Moluccan community that was brought to the Netherlands, was already ‘mixed’, as around 1 in 4 of the marriages was with a non-Moluccan wife from Indonesia. After their arrival in the Netherlands, one-third of all marriages concluded in Moluccan living areas, until 1959, was with a Dutch men or, more frequently, women.20

A 2020 Central Bureau of Statistics study of Moluccans in the Netherlands revealed that a minority of Moluccans has a partner who is also Moluccan. Not more than just over 10% of the grandchildren of the first Moluccan generation has three or four Moluccan grandparents.21 Such relationships may not be problematised as in the 1950s, it seems that they continue to be interesting enough to be counted.

Recently, the mayors of municipalities with a high number of Moluccan inhabitants called upon the national government to acknowledge the harm done to them and to invest in the Moluccan community, including the mayor of Huizen.22