In the late nineteenth century, on 22 January 1889, Oei Jan Lee married Christina van Wijk in Leiden, a university town in the Netherlands. Oei Jan Lee, or as he wanted to be called, Johan Lee, was of Chinese descent, born in the Dutch East Indies (nowadays Indonesia) and his wife Christina was a Dutch white woman, born in the Netherlands. Johan Lee had studied law at Leiden university and in 1889, he obtained his PhD on the topic of Responsibility of the vendor for hidden defects of the good.1 The couple had met through her father, who was a teacher, where Johan Lee had been staying. After the marriage, they had a short announcement in the local newspaper to thank for the interest in their marriage, as was common usage for couples of their class.

Their marriage was considered a ‘mixed’ one. This is the popular term for what was an interraacialised marriage: between partners of two groups that were considered distinct, racialized groups by society, at this particular time and place. The term interracialized points to the constructed, arbitrary nature of references to these relationships and their offspring, and explicitly departs from assigning essentialist status to them.2

No respect for the ‘white race’

Their marriage drew considerable media attention in the metropole as well as in the Dutch East Indies. The colonial press was especially interested because the couple was expected to establish their life there. Such a marriage between a woman who  was considered ‘European’ and a man who, as a Chinese, was categorised as a ‘foreign oriental’ was not only perceived as rare and remarkable, but also as a threat to the colonial racial and legal order. This is what the colonial Bataviaansch Nieuwsblad  wrote about the marriage, blaming Christina’s father:

[Because] a small burger in the Netherlands by marrying off his daughter shows to have thrown away all respect for his religion, for the white race and the nation and the family, to which he belongs (,..).3 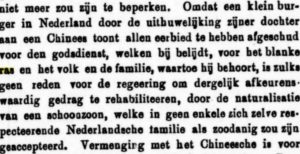 This news report shows how this interracialized marriage of an individual couple was seen as a matter of general interest: endangering religion, the ‘white race’ and the people; it was seen as degrading all of them. It was also common discourse at the time that such a marriage was not seen as a matter of choice by the white woman herself, but rather something that happened to her, because she was naive, was chosen, or, in this case, ‘married off’.4

The excerpt cited here was a response to an earlier commentary by translator of the Chinese language P. Meeter in the Javabode, who welcomed the marriage as proof that Chinese ‘did not fall back to the same level as the natives’, as some had alleged. Under the heading ‘European or Chinese?’, Meeter described Johan Lee in a positive light; not only had Lee married a ‘Dutch lady’, he had studied law, and had applied for naturalisation.5

Although this may sound positive, Meeter believed in a racial hierarchy with the ‘natives’ at the bottom of this hierarchy. He also used racial language in linking the topic of Lee’s dissertation to his ‘Mongolian descent’. This fits with the negative colonial discourses on the Chinese community in which they were depicted as money brokers exploiting the weaker ‘natives’.

Meeter addressed he question whether Oei should be considered ‘Chinese’ or ‘European’. Marrying a ‘Dutch lady’ or ‘a full-blooded Holland girl’ as some media called her 6 was not the only thing that Johan Lee had done to upset this colonial order; Lee claimed equal treatment as European in different ways.

The legal consequences of being Chinese

Lee had already applied for Dutch citizenship in 1886, three years before his marriage, but the request was denied. The Director of Justice of the East Indies was of the opinion that although Lee’s naturalisation was legally possible, it went against the ‘spirit of the law’ to naturalize persons of a ‘completely different race’ and ‘completely different way of living’. A Chinese could never de facto become Dutch and it was in the interest of the colony to keep the different groups apart. The Minister of the Colonies J.P. Sprenger van Eyk (1884-1888)7 agreed that naturalization should be denied, because Lee would still retain the status of ‘foreign oriental’, and if not, naturalization would result in circumvention of the other procedure, the individual request for ‘equality to Europeans’.8  Hence, although the Netherlands government never had racial criteria inscribed in nationality law (as in the United States)9, they applied racial criteria in practice. Consequently, for Chinese, naturalization would remain problematic and an issue of political debate for a considerable period.10

In the colonial order, to be categorised as Chinese had distinct legal consequences. The Chinese had to live in separate living areas under supervision of Chinese leaders and only in exceptional cases could they live in areas designated to Europeans, or where the Indonesian population lived. In 1872, it was expressly forbidden to dress differently than what was considered to be according to the Chinese ‘landaard’ (‘national character’). Furthermore, an 1863 Act restricted mobility of the Chinese and ‘natives’ by an obligatory pass system. The rules to separate living quarters and the pass system remained in place until 1919. These rules demonstrate how blurred racial lines in the colony actually were; keeping the Chinese legally apart was a way to make racial distinctions be displayed openly and more distinct.11

Lee, however, did not obey these rules. For instance, in 1889, a few months after this marriage, newspapers reported that he had attended a session of a local court, ‘fully dressed as European’, and wondered how the colonial authorities would react to this violation of the dress code.12 He also converted to Christianity and that too was reported in the newspapers.13

Where did a mixed couple belong?

It can be assumed that these rules would also affect Lee’s wife Christina, although this was hardly mentioned. It raises the question where, as a mixed couple, they were allowed to live, and how Christina was supposed to dress. Meeter also wondered how the couple would be treated by the Indisch society, and how she would endure the whispering and giggling by ‘particular Indies ladies’ about their unusual union. He also indicated that, as a European woman, she would feel uncomfortable, if he would be obliged to dress as Chinese.

This implies that a European woman would only be interested in a man who looked European, in other words, who performed Europeanness, even if he wasn’t. The reference to particular ‘Indies ladies’ is a racialised and gendered discourse, which was well-understood as a reference to European women of mixed decent who were held responsible for prejudices in colonial society.14

Johan and Christina’s arrival must indeed have created quite a stir in the colony. One newspaper resisted a possible treatment as European, as Lee, in their opinion, was still young, and had done ‘nothing at all’ to serve the general interest. The report continued:

If it would be enough to master the Dutch language and complete an academic education in the metropole, this would be followed by countless requests by well-off Chinese.15

The author claimed it was not necessary to spell out the consequences, as they were clear to all those familiar with the colony, so it is believed that the government would refuse the request.

In 1891, two years after the marriage, Lee was granted equal treatment to Europeans.16 In 1892, he applied for Dutch citizenship once more. By then, he was an attorney at the Indisch Supreme Court. This time, his request was granted and the Director of Justice and the Council of the Indies advised positively. They concluded that he had ‘not fallen back’ to the Chinese way of living and customs, and considering his job, his marriage to a European woman, and his social position he could be considered European. Naturalization then, confirmed ‘the truth’ of what he was. Lee was naturalised by law of January 2nd 1893 (St. 1893 no. 9). Nevertheless, this was considered the exception that confirmed the rule, which remained that ‘foreign orientals’ could not naturalise. Naturalisation for Chinese remain problematic for years after Lee.17 In the end, although he did everything he could, it is questionable whether Lee upset the colonial order, especially because he remained the exception, with the colonial racial legal order firmly in place up till decolonization.

At some point, Johan and Christina returned to the Netherlands. Lee died in The Hague in 1918, Christina in 1941. Their life events no longer drew media attention. However, it is likely that their life as an interracialized family in The Hague will have been highly affected by the racialized discourses on the Chinese that travelled back and forth between the colonies and the metropole. Retelling their story, as far as possible based on the available sources, gives some insight in how they were affected, and how they responded.