In the past months of the Black Lives Matter protests and the many discussions that followed in the US and in Europe, including the Netherlands, ‘mixed’1 or interracialized couples were significantly more visible in the media than normally. This media presence was also of a different nature than usual, as normally, media representations of mixed couples are, at least in continental Europe, about cultural differences and reactions by family and friends rather than structural racism.

Numerous media articles addressed the position of those families within the debate on racism, from the perspective of one or both partners or parents, or from the perspective of youngsters of mixed descent. This blog aims to critically analyse this media coverage, in order to address the complex positioning of mixed couples within this racism debate. A caveat is that we do not know how these news stories came about, whether the couples and partners volunteered to tell their stories or what questions journalists posed to them, or the extent to which they were aware of the context in which their stories would be presented. The analysis is based on a collection of US, UK, Dutch and Belgian media reports (mainly newspaper articles available online), without claiming to be exhaustive. Evidently, the context in these countries is very different: in the USA and the UK it is common to talk about issues of race, racism and ‘interracial’ couples. In the Netherlands and Belgium this debate has only just started.

Although mixed couples have been historically problematized and pathologized, in dominant discourses of a colour-blind world, mixed couples are perceived as the solution to racism. If we all fall in love and marry ‘across the color-line’, the argument goes, racism will disappear. This discourse was brought forward during the Black Lives Matter debate in the US newspaper Washington Times. In its editorial, this newspaper stated:

There is no racially charged lecture, demonstration, riot or war that can better melt hearts hardened by racism than the innocent eyes of a child born form the love of an interracial couple. One look is all it takes to rediscover a simple truth that no one can reasonably deny: all lives matter.2

This highly problematic argument is assimilationist, denies the racism often directed at interracial couples and children of mixed descent, and ignores power structures and institutional racism. Such arguments also deny the historical fact that mixed relationships do not equal anti-racism. As an obvious example, in the colonial past mixed relationships occurred frequently, but only between white men and colonized women as relationships of power and submission that served the colonial racist system. and kept the color-line in place.3

Against this background, one may observe the increased media attention for mixed couples during the Black Lives Matter debate with some suspicion. They may be put forward as proof that racism, if it exists at all, will soon disappear. In an alternative representation, mixed couples may be seen as ‘bridges’ that foster understanding between communities, and are more ‘accessible’ to the public (read: white audiences) who are thought to relate more easily to the experiences of a white person married to a black person than the racism experiences of a black man or woman. In this respect, a Dutch TV news broadcast on BLM featuring a Dutch white woman in a mixed family in the US, her children of mixed descent but not her black husband, and several other persons of mixed-descent explaining the meaning of BLM and their experiences with racism appeared somewhat awkward.4 It is similar to advertising wanting to become more ‘diverse’ by picturing mixed families and persons of mixed descent, but no black families.5 Hence, the strikingly frequent presence of mixed couples in the BLM debate is not in itself positive; it matters how their experiences are voiced and what message is brought forward.

When the experiences of mixed couples are presented, the different positioning of the white and black partners on the one hand and parents and children on the other hand becomes clear. First of all, not all white partners are anti-racist; they may deny the existence of racism or even make racist comments themselves; in short, the white partners are not necessarily allies in anti-racism struggles. Although there is some US and British research to testify that, compared to other white people, white partners in mixed families, especially white women, are more often aware of racism this is certainly not self-evident. 6 During BLM, several youngsters of mixed descent testified how they were painfully unable to talk with their unwilling white parent and wider white family circle about their experiences with racism; they were not supported, and their experiences ignored or denied.7

As some white partners confessed, the murder of George Floyd and the BLM protests that followed served as a wake-up call. While they had either ignored or denied the existence of institutional systemic racism before, they felt they could no longer do so and had to speak up, especially those who were parents of mixed-race children.8 It seems that white partners speaking up is one of the reasons why mixed couples have become visible in the BLM debate. However, there are also those who did this before BLM, such as Dutch Minister Sigrid Kaag, who is a white Dutch woman married to a Palestinian husband.9

With regards to mixed couples and the BLM debate, the black partners were less present, and if they were, this was almost always as part of a couple rather than alone. An exception was the essay in the Dutch magazine Oneworld by Valerie Ntinu who explained why, as a black woman in a mixed relationship, she valued the negative reactions towards her white partner by black family and friends differently than negative reactions by white family and friends, because the former came from their experiences with racism.10 In the Dutch and Belgian context, black women who intervened in the debate could count on negative or even aggressive reactions from largely white audiences. This happened to Peggy Bouva who in a podcast on the enslavement of her ancestors in Surinam, together with journalist Maartje Duin expressed doubt whether she would be happy with her daughter entering a mixed relationship with a white partner.11 Her opinion was considered ‘reverse racism’ (racism from black to white). This label, however, flagrantly denies the experiences that she retold: Peggy had interracial couples in her family of which the white partner denied the existence of racism. Sabrine Ingabire who said in an interview to no longer want to date white men, had done so in the past, but got fed up with their racist comments on her looks and sexuality.12 The testimonies of these women were unwelcome because they disturbed the myth of colour-blindness that mixed relationships are supposed to exemplify to a liberal white audience.

The need for black-white couples to talk about racism together

Dear Black interracial couples with a significant other who is White (raises hand),” she said. “We DO NOT need to protect them. I promise, they will be A. OK. They need to continue to fight for us. If they get offended when you talk about racists. You have a bigger problem on your hands.13

These articles do not start from color-blindness, but on the contrary stressed that being non-racist is not the same as anti-racist.14

Most interviews were with parents talking about the racism that their children experienced and how they dealt with it as a couple. Having “The Talk” (preparing the children how to respond to racism they would experience as they grew older), is well-known in the US but not in the European context, Now,  “The Talk” occurred across Europe, marking the shift from a culturalist to an anti-racism discourse.15

Young people of mixed descent were represented as feeling a need to position themselves within the BLM debate. Some were wondering whether they could speak up at all about racism, as they felt they were considered ‘not black enough’.16 An image circulated on social media saying: Mixed black folks. You have the right to speak out about black issues because you are black. 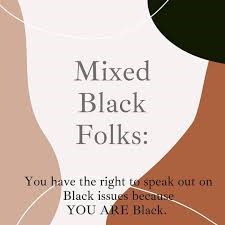 For others, the BLM movement also served as a wake-up call. In the Netherlands Johan Fretz, a publicist and comedian of mixed Surinamese-Dutch descent, drew considerable attention with an essay in which he admitted that he used to ignore racism, but now realised that he could no longer do so; he vowed never to be silent again.17 His essay was widely shared on social media and considered honest and brave.18

In other stories, the intergenerational aspect comes forward, of youngsters of mixed descent acknowledging the racism that their black parent must have experienced their whole life, even if they hardly ever talked about it. Such news reports reflected on the different ways of addressing racism across generations.19

In the months in which the BLM debate was at its height, mixed families and couples were more present in the media than in decades before and outspoken about racism. For the European context, this signifies an important shift from a culturalist discourse about mixed relationships to a discourse about anti-racism. However, at times, the presence of mixed couples was used to confirm the dominant discourses on ‘color-blind’ futures and of building ‘bridges’, Other media representations deviated from this dominant discourse and challenged it as a myth, by emphasizing systemic racism.

The observation that the white partners of mixed couples were most prominent raises questions about whose voices are being heard. This is all the more important as black women who questioned the image of mixed couples as racism-free zones received negative and aggressive reactions. It demonstrates that continued critical intervention by members of mixed families is needed to contribute to the much needed debate on their position in the BLM and anti-racism struggle.